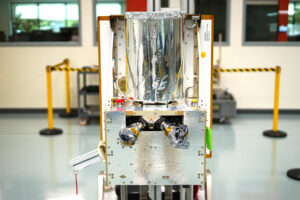 Spaceflight Industries is arranging the launches for BlackSky, said Merski, who is responsible for supporting BlackSky and formerly directed the BlackSky constellation program.

After the SpaceX rideshare, BlackSky has another four satellites booked to launch on India’s new Small Satellite Launch Vehicle this year, though delays with that program have made a launch date unclear, Merski said.

BlackSky has four satellites in orbit from launches in 2018 and 2019 that were built in-house by Spaceflight. The company hopes to have 16 satellites in low Earth orbit by early 2021.

LeoStella, a joint venture of Spaceflight Industries and Thales Alenia Space, is building 20 satellites under a contract with BlackSky, some of which will replace older satellites to maintain a 16-satellite constellation, Merski said.

Merski said the LeoStella-built satellites feature improvements in manufacturability, a rapidly commissionable imaging payload and steam-powered propulsion units from Bradford Space. Each satellite weighs 55 kilograms and is designed for a three-year service life, he said.

BlackSky, through Spaceflight Industries, is still arranging launches for another six satellites it hopes to have in orbit in less than a year. Merski said launch opportunities have become more numerous for smallsat operators, making later launch contracts more manageable.

“The market is changing so you don’t have to book all these launches 24 months in advance,” he said. “We’ve got plans laid in place in pretty advanced negotiations with a couple different providers.”

BlackSky is late on its LeoStella payments, according to Intelsat, which loaned BlackSky $50 million last year. Merski declined to say when BlackSky will catch up on payments, but said LeoStella is continuing to build its satellites.

BlackSky has a long-term goal of operating a 60-satellite constellation. Merski said the company will pursue that number based on market demand for its optical imagery. With 20 satellites, BlackSky can provide 1-meter resolution imagery with hourly revisit times for most major cities, he said. A constellation of 60 satellites would shorten revisit times to around 15 minutes, and sharpen resolution to under one meter, he said.

BlackSky has a ground network of six gateway stations, one the company built and five it uses through leases, some of which BlackSky installed equipment at, Merski said. By mid-2022, BlackSky anticipates having 10 gateway stations through a mix of partnerships and fully-owned stations, he said.