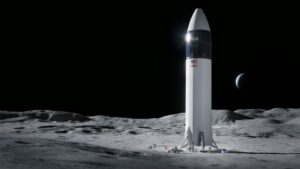 WASHINGTON — An amendment to a Senate bill would require NASA to select a second company for its Human Lander System program, a provision some fear could upend the overall effort to return humans to the moon as soon as 2024.

The Senate Commerce Committee approved in a markup session May 12 a NASA authorization bill as an amendment to the Endless Frontier Act, a bill that would establish a new technology directorate for the National Science Foundation. The amendment was one of dozens considered by the committee during the session, which ultimately approved the bill on a 24–4 vote.

The amendment, known as the Space Preservation and Conjunction Emergency (SPACE) Act of 2021, is a version of a similar bill the Senate considered in 2020 but was not enacted. As the name suggests, it addresses issues associated with space traffic management, including directing the Office of Space Commerce to handle civil space traffic management responsibilities.

The amendment, though, also includes a NASA authorization for fiscal year 2021 similar to one the Senate approved at the end of 2020. A new provision in that amendment covers “competitiveness within the Human Landing System program,” the NASA program to fund development of crewed lunar landers. NASA awarded a single HLS “Option A” contract to SpaceX April 16 valued at $2.89 billion to develop a lander based on the company’s Starship vehicle and to fly a single demonstration mission.

The amendment directs NASA to fund development of “not fewer than 2 entities” in the HLS program no later than 30 days after the bill is enacted. It would authorize a total of $10.032 billion for the program, although funding would have to be appropriated separately, and on an annual basis.

The language has raised questions about how it would be implemented. It is unclear how the agency would select a second provider, as it could not run a new procurement within 30 days. Selecting one of the losing Option A bidders, Blue Origin or Dynetics, based on their original proposals could prompt a protest from the other company or from SpaceX, according to industry sources. The Government Accountability Office is reviewing protests filed by Blue Origin and Dynetics about NASA’s selection of SpaceX for the single HLS award, with a decision due by Aug. 4.

“By purchasing commercial services to take astronauts from lunar orbit to land on the surface of the moon, we will ensure a robust deep space transportation system is in place as we learn to live and work on another world for the benefit of all. NASA is unable to comment on the proposed amendment due to ongoing litigation of the recent Human Landing System selection,” the agency said in a statement to SpaceNews, referring to the GAO protests.

Neither that provision nor the overall amendment was discussed by the committee during its markup. However, the chair of the committee, Sen. Maria Cantwell (D-Wash.), has previously made clear she was disappointed that NASA, citing budget constraints, selected only one company for HLS Option A awards.

“I have to say I was surprised last week about the Human Landing System development contract,” Cantwell said at the April 21 confirmation hearing for Bill Nelson’s nomination to be NASA administrator. Nelson, during the hearing, committed to accelerating a competition for a future lunar landing services, but Cantwell pushed for faster action. “I think there needs to be redundancy, and it has to be clear in this process that it can’t be redundancy later. It has to be redundancy now.”

There is no guarantee that this language will make it into the final version of the bill, assuming it passes both the House and Senate. Efforts to pass NASA authorization legislation of any kind in recent years have foundered because of disagreements between the House and Senate and the relatively low priority of such legislation.

NASA has started planning for those follow-on service contracts, known as Lunar Exploration Transportation Services (LETS). NASA issued a request for information April 28, seeking feedback on a proposed broad agency announcement that NASA plans to issue this summer before the overall LETS procurement.

That broad agency announcement, known as Appendix N of the Next Space Technologies for Exploration Partnerships (NextSTEP) program, would support initial risk reduction work for the later LETS procurement. At a May 3 industry day, Lisa Watson-Morgan, NASA HLS program manager, said the agency hopes to issue a formal request for proposals in June and make selections between August and October.

The awards, though, will be no more than about $15 million each, and have periods of performance of only 7 to 12 months. “The funding is TBD,” she said. “We think we are able to award a few at $15 million.”

The later LETS award could include some funding for design, development, testing and evaluation work, although specific details remain uncertain, Watson-Morgan said. The contracts would cover at least six missions starting in the late 2020s, she said, with at least two missions per contractor.