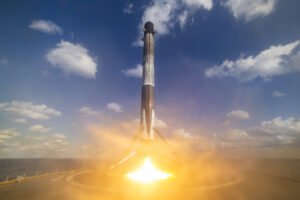 WASHINGTON — SpaceX on May 6 was awarded an $8.9 million contract modification that gives the U.S. Space Force direct insight into the inner workings of the company’s commercial and civil space missions.

“This contract provides for non-NSS fleet surveillance efforts across the SpaceX family of launch vehicles for non-NSS missions,” said the contract announcement. The $8.9 million is an addition to an existing $297 million contract awarded to SpaceX in February 2019 for three national security launches.

A spokesman for the U.S. Space Force’s Space and Missile Systems Center said in a statement that the contract modification “enables the Space Force to engage in engineering surveillance of SpaceX’s fleet of launch vehicles for non-NSS launches.”

The existing $297 million fixed-price launch service contract requires SpaceX to provide access to data and analyses of the launch vehicle systems, the spokesman said. But it did not include access to “tools, systems, processes and launch site activities developed by the launch service provider for non-NSS missions.” These tools are unique and proprietary, developed by launch providers for analyzing data generated by their internal systems.

Under Phase 1A of the National Security Space Launch program, SpaceX and United Launch Alliance received multiple contracts over the past four years, and many of those missions have not flown yet. SMC said a similar fleet surveillance modification for Phase 1A contracts will be awarded to ULA. Access to fleet surveillance also will be required in Phase 2 launch service procurement contracts scheduled to be awarded later this year.

The SpaceX contract gives SMC visibility into the company’s operations during an especially active launch period as SpaceX deploys its Starlink broadband internet constellation with its fleet of Falcon 9 rockets. So far seven Starlink missions have been launched and several more are planned before the end of the year. SpaceX also is preparing to launch a commercial crew NASA mission to fly two astronauts to the International Space Station.

The access to the company’s internal operations will help the Space Force “enhance mission assurance for NSS launches using the Falcon 9 and Falcon Heavy launch vehicles,” the SMC spokesman said. “Engineering insight into all launches by an NSS launch provider such as SpaceX directly contributes to increased reliability of national security launches.”