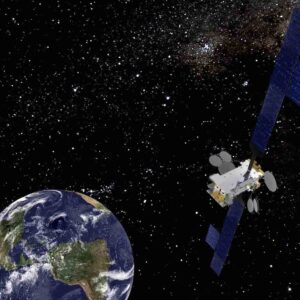 WASHINGTON — The Export-Import Bank of the United States has arranged financing for the SpaceX launch of a Hispasat satellite, the first space deal the bank has done in six years.

Ex-Im announced June 21 that it approved $80.7 million in financing for a Falcon 9 launch of a Hispasat satellite, Amazonas Nexus, as well as launch and initial in-orbit insurance. The bank said the financing will be in the form of either a direct loan or a loan guarantee.

The Spanish operator announced in early 2020 it ordered Amazonas Nexus from Thales Alenia Space. The 4,500-kilogram satellite will replace Amazonas-2 at 61 degrees west in geostationary orbit. At the time of the contract announcement, Hispasat said it expected to launch the satellite in the second half of 2022. Bpifrance, France’s export credit agency, is financing the construction of the satellite.

The deal was notable because it was the first space industry deal financed by Ex-Im since 2015. The export credit agency was sidelined for several years by a lapse in its authorization and then a lack of a quorum on its board, which prevented it from approving deals larger than $10 million.

The Senate restored that quorum by confirming three nominees for the board in May 2019. An omnibus spending bill signed into law in December 2019 authorized the bank for seven years, the longest reauthorization in the bank’s history.

“This transaction signals the return of Ex-Im in support of the U.S. satellite-related industry,” said James Cruse, acting first vice president and chairman of the bank, in a statement. “The need for export credit agency support is well-established in this industry, and the availability of Ex-Im’s financing enables SpaceX and other U.S. exporters to remain competitive.”

The industry, though, has changed significantly since 2015. Up until that time, Ex-Im primarily financed GEO satellite and launch deals, supporting satellite manufacturers such as Boeing, Lockheed Martin and Orbital Sciences, as well as SpaceX launches, with a total value of about $5 billion. However, demand for GEO satellites dropped precipitously in the latter half of the decade, and has only modestly recovered, as industry interest shifts to low Earth orbit megaconstellations.

That did not stop Ex-Im officials from promoting their role, even if they overplayed it. “During the present contraction in financial markets, Ex-Im continues to carry out its mission by providing financing when private lenders lack the capacity to do so,” Spencer Bachus, a member of the bank’s board, said in the statement. “In addition, one very positive outcome of the action we took today will be the preservation of approximately 500 U.S.-based jobs.”

It is unlikely jobs at SpaceX were in jeopardy had this deal not closed. Commercial GEO satellite launches represent a small fraction of SpaceX’s overall launch activity, which is dominated by its own Starlink constellation as well as U.S. government business.

Ex-Im officials said last November they were evaluating nearly $2 billion in applications for financing in the space industry, acknowledging that the market had changed since 2015. They said they were looking at deals beyond traditional GEO satellite manufacturing and launch contracts, but said any new technologies had to be proven and demonstrate a “commercial viability” to ensure repayment of the financing the bank underwrites.