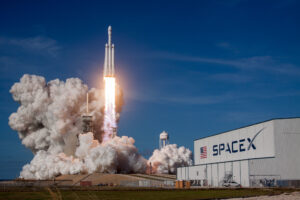 WASHINGTON — The U.S. military command that oversees logistics operations has signed an agreement with SpaceX and XArc to study the use of space launch vehicles to transport supplies in an emergency.

“Think about moving the equivalent of a C-17 payload anywhere on the globe in less than an hour,” Lyons said. The C-17 is a very large military cargo plane capable of transporting a 70-ton main battle tank.

Transportation Command has signed a cooperative research and development agreement, known as CRADA, with SpaceX and Exploration Architecture Corporation (XArc) to study concepts for rapid transportation through space.

“There is a lot of potential here,” said Lyons He noted that one of the challenges of military logistics is the “tyranny of distance and time, and global access.”

Space transportation is weight- and volume-constrained compared to airlift, and has limited options for launching and recovery operations. “As industry advances to overcome these challenges and decrease costs, a space transportation capability to put a crucial cargo quickly on target at considerable distances makes it an attractive alternative,” said U.S. TRANSCOM Deputy Commander Vice Adm. Dee Mewbourne.

Under a CRADA, industry participants are not paid but volunteer time and resources to help the government study “use cases” for their technology and concepts of employing space as a mode of transportation.

One of the scenarios would be to establish a space transportation surge capability, similar to the existing Civil Reserve Air Fleet (CRAF) emergency preparedness program where civilian airlines commit to augmenting DoD airlift capability during emergencies.

“I had no sense for how fast SpaceX was moving, but I’ve received their update and I can tell you they are moving very rapidly in this area,” Lyons said.

The possibility of using SpaceX vehicles to move military cargo was mentioned in 2018 by former commander of Air Mobility Command Gen. Carlton Everhart.

SpaceX President and Chief Operating Officer Gwynne Shotwell at a defense industry conference last year said the company was talking to the Army about the possibility of using the Starship vehicle for point-to-point transportation around Earth and deliver cargo in minutes halfway around the world.